The BGA celebrated their 125th Anniversary on Sat 27th October with a tournament to which all 21 Border Clubs were invited but for various reasons some were unable to attend. The format of the match was a 6-player team featuring 2 committee and 1 player from each handicap class. Scoring was the best five stableford scores out of six.

As Scottish Golf is now representing both sexes, ladies were welcomed in the teams.

There were a number of no shows which was disappointing but with a bit of rearranging eleven clubs and a BGA team got under way on a Bright, cold and very windy day.

The course was in great condition and it was playing very long with some of the tee markers well back on the tees.

Galashiels and Hawick got the show on the road.  Both teams had players with best scores of 30 points but Galashiels had the better lower scores to finish with 143 points

Kelso, Melrose and the Woll were next on the course. Neil Crooks of the Woll returned 34 points but the best score in the group came from Melrose’s lady member Janice Whiteford scored 36 points. However it was Kelso’s consistent scoring that put them in the lead with a total of 155 points.

Peebles and Minto were next on the tee but could not catch Kelso. St Boswells and Jedburgh followed on and Jedburgh made a gallant effort to catch Kelso and failed by 1 point. Was it a missed putt or a duff that cost them the lead we will never know?

All their efforts were in vane because the home team Torwoodlee were on form and returned a score of 160 points with a splendid 37 points from Craig Lees. Unfortunately for Craig he was deprived of first Prize in the sweep by an unnamed BGA official from Langholm who had his round of the season, make that the Century. This unnamed person only hit one green in regulation, the 12th, where he got a two and also had the cheek to chip in on the 14th for a five.

When all the scores had been checked and the calculations done the prizes were present to the first three teams.

Thanks go to Torwoodlee for hosting the event and especially the Torwoodlee members who cleared lots of leaves and twigs from the course the day before. Non golfers will not know how infuriating it can be to try to find a golf ball in a pile of leaves. Thanks also to Belhaven Brewery for sponsoring the refreshments at the 9th Tee and in the clubhouse. 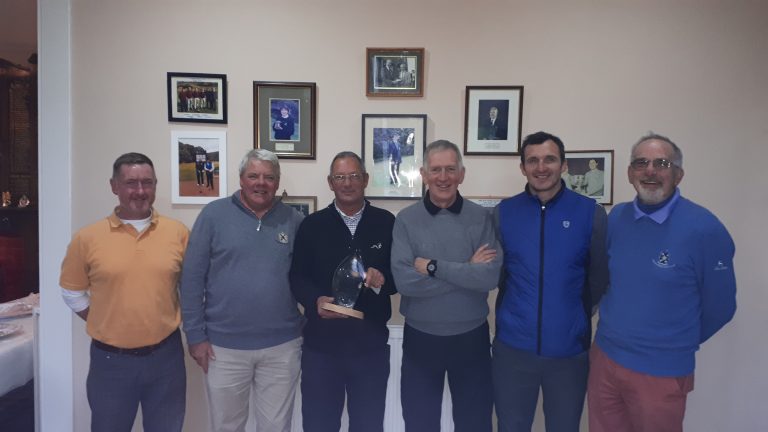