A great entry for the 2020 championship saw 65 competitors brave wretched wet and windy conditions over the Ladhope course resulting in some very high scoring and the CSS calculated at 70 Reduction Only. A few managed to master the conditions including Jack McDonald who shot a magnificent 68 to clinch a maiden Border Championship. A special thanks must go to Galashiels Golf Club members and committee for hosting the event in an extraordinary season. Thanks to the clubhouse staff and also to Colin Finlay for presenting an excellent course with some of his trademark pins! which obviously helped him on his way to grabbing the 1st handicap prize. 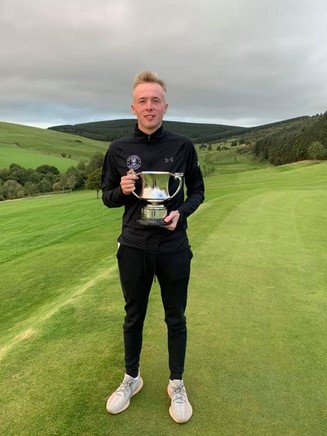 There was a disappointing entry for the 2019 Championship. The competition was first run in 1893 with T D Crichton Smith of Kelso the first winner. There are great names on the list the competition use to be run over 72 holes with a cut of 30 players for the final two rounds. Unfortunately we could not get 30 players to enter this year’s competition.

The Weather was good but the course was wet which shortened the distance the ball went. Because the club was allowing lift and clean in the short rough the competition was non counting for handicap. First out set the pace with Andy Lawrie and Colin Riddle scoring 72. This was equaled by Glen Ross Oxton and Paul McVie and better by Ryan Hush and Paul Johnson (69) .Simon Fairburn who was 3 over after 7 holes got himself back on track with a hole in one at the 8th hole. Five 3’s on the back nine but the 18th hole bit back and double bogie cost him dear and a round of 68 gave him the lead.

Scoring was higher in the second round and one by one the contenders dropped out. Andy Lawrie and Glen Ross Oxton scored 72’s for a total 144 but Simon Fairburn’s 71 for a total 139 took the lead. Paul Johnson second round of 70 left the pair level so a playoff was required.

A 3 hole playoff using the 1’st, 17th and the 18th holes. Simon missed the green on the 1st hole, Paul was off the green by inches. Simon failed to get up and down and Paul was 1 stroke to the good. The 17th hole is a drive-able par 4 but you can’t be right with your tee shot. Paul was up the middle about 20 yards short. Simon pushed his tee shot into the trees on the right played a provisional ball which finished 5 feet from the hole but his first ball was found in deep grass. A difficult shot ended up in the bunker and plugged which made it worse. Paul chipped up and got his 3 and then scored another 3 on the 18th hole to win.

The BGA wish to thank Hawick Golf Club for the use of the course and the Club House for looking after the Players. And a Big thank you to Ali George who not only played in the competition but cut the greens before he played. 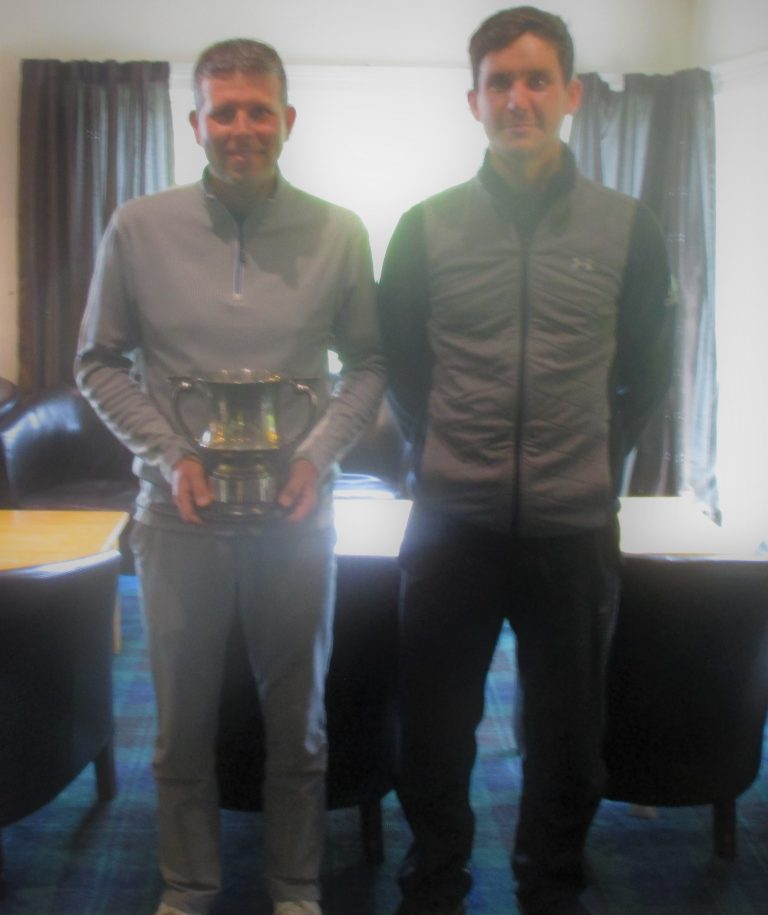 The Border Championship returned to Kelso Golf Club after a number of years. Ian Lauder was the winner the last time and he started off with the best score in the morning round. His 68 put him ahead of Angus Massie, Alan Chalmers and Andy Lawrie by 1 shot. Hovering on rounds of 70 were the two ultra-low handicappers of Darren Howie and Simon Fairburn, both who play off +3. Also on 70 was Paul McVie.

The weather was unkind at the start but improved as the day went on which helped the scoring which was much better than in the first round. Unfortunately this was not the case for Ian who had 2 bogeys and a double on the first 9 which put him out of contention.

David Gillie and Mark Collins came into contention with 67’s and Paul Mcvie followed his first round 70 with a 69. But all eyes were on the hot pair of Darren and Simon. Darren stormed to the turn in 31, 4 under and Simon, one behind on 32. Simon skipped ahead on the 11th hole with an eagle to Darren’s par. A birdie on the 14th gained another shot for Simon. It swung the other way on the 16th with a Darren birdie.

Things were heating up and an untidy 5 from Simon on the 17th against Darren’s birdie left the young Peebles golfer ahead. It was here where the golf gods kicked in. Unbelievable, Darren’s drive went out of bounds on the par 5, 18th hole. He recovered slightly scoring a birdie his second ball for a bogey 6.

So here it was, Simon needed a birdie to win and a par for a playoff. I received information from a playing partner that on the 488 yard par 5 hole, Simon hit an eight iron through the back of the green for his second shot and got up and down for the win to make it back to back wins for the Torwoodlee man.

Congratulations to all players for making it a great Championship

The BGA thanks Kelso Golf Club for the use of the course and of course their green staff and catering staff. Thanks also to Lloyd Jaguar Land-Rover of Kelso for sponsoring the event.