For the second year in succession only 4 clubs entered this event , Torwoodlee, Galashiels, Peebles & Hawick all braved the harsh weather conditions over the Ladhope course who hosted the competition as part of the BGA Border Championship triple header of tournaments. Torwoodlee the 2019 holders managed to hold off the hosts to retain the title. Please click below for full result.

Only Four of our 21 Border Clubs entered the Annual BGA Team Competition for the right to play in the Scottish finals.

The venue, Galashiels Golf Club was the battleground where Torwoodlee, Duns, Kelso and the host club Galashiels would contest the title. The format for the competition was a 4 man team with the best 3 scores to count and the 4th in case of a tie.

An extract from the clubs web site gives some advice on the course and how to play it.

Originally an 18 hole course, established in 1884 and designed by James Braid around the Ladhope Burn, the original layout was re-designed in 2008 with the current 9-hole layout being played since.

With a competitive standard scratch of 68, this 5,400 yard track has 16 individual tees that present a thought on how to play every hole.  Don’t let the short yardage fool you.  This place will test the best of golfers, but is also very fair to the higher handicap.  The undulating course provides many options to make a score on each and every hole.  The aerial route isn’t always necessary, or even advised…

Simon Fairburn set an early target with a round of 69; of course he had to add 2 shots on to his total as he plays off +2. Scott Nightingale would have bettered this if he hadn’t started with a 7 on the first hole which is a par 3. After this disastrous start a round of 73 is good. Best score of the day came from Jackson Berry with 67. Bob Hogarth (Kelso) playing off 3 had a gross score of 70.

When the scores were totaled up, Torwoodlee run out the winners with a total 210. The other three clubs were close together Gala 225, Kelso 226 and Duns 229.

The BGA thanks the Galashiels Club for the use of the course and clubhouse and compliments the green-staff on the condition of the course.

The hosts of the BGA Team Competition this year was Melrose Golf Club. They are the first winner on the George Wallace Memorial cup, in 1964. By pure coincidence, who was at the clubhouse to let me in, Davie Campbell who played in the Melrose team in 1964.

The format of the competition was the best 3 scores out of 4 with the 4th score if a tie. The winner would represent the Borders in the Scottish final at Kinross Golf Club. If they won that, a place in the European final, to be held in France.

The course looked very fresh, back to green, a little wind, the sun shining, what more could you ask. A good score, did someone say.

It was strong field with 8 players scratch or better, but they could not master the Melrose course. Whether it was the higher handicappers not getting into trouble or the scratch players not used to the course. It was Ian Ramsey (Melrose) who showed them the way. Playing off a handicap of 4 he returned a nett 64. He was not let down by his team mates and Melrose took the handicap prize by 6 shots from the Woll.

In fact, the scratchers or better managed to take the last six places, out of 20 players. All clubs that missed the competition missed a chance of glory. Melrose were only 4 behind Peebles, the winners with 217, but had a total handicap of 24 against the winner’s handicap of -1. Hawick were second by a point on 218.

The BGA thank Melrose for their hospitality, the pies were excellent. They were so keen that they entered the competition for next year. There is nothing gives me more pleasure to this job than players showing excitement to compete irrespective of ability. 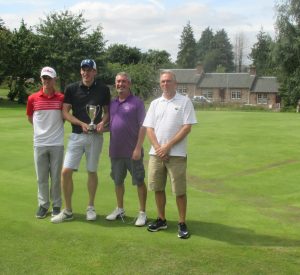