A very young talented Border Boys Team teed it up last Sunday 12th Sept at Dullater Golf Club to compete against 13 other Scottish regions for the Scottish Boys Area Team Championship title. The Borders Team of Gregor Brydon (Torwoodlee), Cameron Brydon(Torwoodlee), Lyle Gillie (Torwoodlee) and Rory Adams (Hawick) were seeded last based on handicap index, but the young Borders players gave a good account of themselves over the 36 hole tournament. After the morning 2 ball foursomes the Borders were lying in 12th position and after the singles in the afternoon slipped one place to finish 13th overall but still remained ahead of Argle & Bute in the final standings. The Dullater course was very undulating and the greens very fast making scoring very difficult Gregor Brydon shot a very commendable 9 over par 79 scratch in the afternoon to finish joint 26th individually out of a field of 56 players. It was a great experience for the boys who still have another 3 years in this tournament and this will help build towards future success for the Borders. The Team members are all part of the BGA boys squad currently receiving coaching from Frank Scott at Synton Mains driving range through funding from Scottish Golf.  The B.G.A would like to thanks CGI for sponsorship of the Team Shirts. 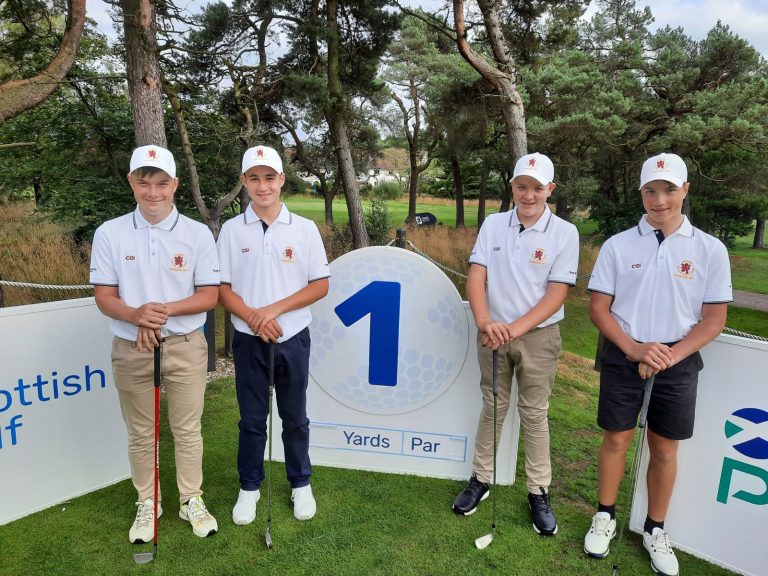 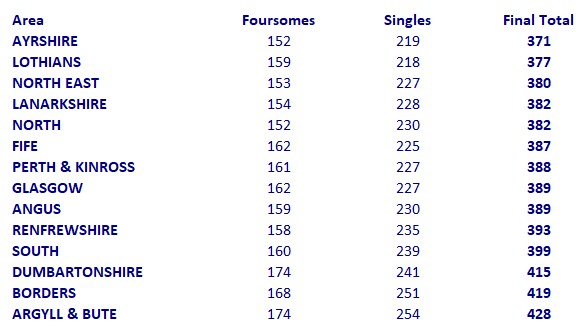 The Eastwood Golf Course was the venue for the Scottish Boy’s Area Team Championship. The 16 Scottish Areas were represented by 4 boys who played foursomes in the morning and singles in the afternoon.

The course is situated just off the M77 south of Glasgow. None of our boys had played the course so the practice round on Saturday gave them a look at the layout of the course which is for the most part either up or down with water on the flat sections. After a meal in the clubhouse the boys retired to a Travel Lodge near Kilmarnock. All the teams were struggling for places to stay as someone called Ed Sheeran was playing a gig and all his fans had taken up all the beds in Renfrewshire.

We fortunately had booked early and it was just a 10 mile trip to Kilmarnock.

Tee off was 7.15 so an early rise was needed just to travel and get something to eat. Something else was feeding, the midges. Scotland’s holiday disaster was at their worst. One official who smoked found lots of new friends seeking to shelter in his clouds of smoke.

The alternative stroke competition (Foursomes) is a forgotten form of the game for most youngsters. Almost All the boys playing are in the low single digit number handicaps but the scores ranged from 2 over to 37 over par. The Borders fell in the middle ground at +19. Rounds of 79 and 80 put us in 9th place.

Soup and sandwiches for lunch and it was away with the singles. As always in golf, just the odd missed putt or an off line drive and the score mounts. Our boys combined handicaps totaled 16 and there singles total was only 9 behind the winners singles total. We finished = 10th and they did what we want, they competed.

A bite to eat from the excellent clubhouse staff that produced food for hunger men and boys. We were on our way home and the real winner of the day was the Mighty Midges, they were undefeated.