The B.G.A Summer league Semi-finals and Final were contested over Ladhope golf course yesterday Sunday 20th Sept in a great sporting spirit. The semi-finals in the morning were played in damp but benign conditions with the ground eventually drying up for the afternoons final.

After a hearty plate of soup, a few rolls and some light refreshments the 12 finalists went back out to do battle over the Ladhope course which was in excellent condition with some favourable pins.

The Final commenced with 2 of the finest golfers in the region going head to head. Darren Howie eventually beating Simon Fairburn by 2 & 1 to give Peebles their 1st point on the board with the target 3.5 points to win. In the next Match Jackson Berry and Borders legend Alan Turnbull fought out a halved match to make it 1.5 to 0.5 to Peebles. David Gillie won 3&2 against Kris Hopkirk to level the score at 1.5 each. In the fourth & final scratch match Paul McVie beat Mike Foley 3&2 to give Torwoodlee the lead 2.5 to 1.5. With all the Scratch matches finished if was down to the handicap matches to decide the trophy. Young Fearghas Lowther beat Dean Keddie 2&1 to again square the overall match at 2.5 to 2.5 and leave it up to the anchor-men in each team to go for glory. The final match on the course again a handicap-based game was between Scott Noble(Tor) and Rab Howie(Peebles). Noble 2up playing the 16th (Vardon Slope) played a superb 2nd shot to 20ft and had a putt to win his match 3 & 2 and also win the trophy for Torwoodlee but a great 3rd (flop) shot from Howie to 15ft put the pressure back on Noble who raced his first putt past the hole some 6ft and in a typical match play scenario Howie held his nerve holing a superb putt for par to put real pressure on Nobles 6ft putt now for a half which he subsequently missed. With Noble only now 1up with 2 holes to play Rab Howie had the honour and greened a superb tee shot at the 208yd 17th (Well hole) to some 20ft behind the pin. With real pressure now on Noble he also held his nerve and matched the drive of Howie also finding the green but ended up in a more favourable putting spot about 25 ft directly below the pin. Noble putted first and rolled it up to the side of the hole which was conceded by Howie. Howie then putted his ball across the green with a large right to left break but when the ball reached the hole it just shaved, and the break and fast green took the ball about 10ft down the hill forcing a difficult putt to be holed to keep Peebles hopes alive. Sadly, for Rab and Peebles the putt just missed and Torwoodlee “A” were crowned the 2020 Summer league champions lifting the D. McLeod Trophy.

A special thanks go to the members, committee, and staff at Galashiels golf club for the use of their course and clubhouse over the past 2 weekends. Thanks also to David Hogarth for providing the catering. The B.G.A would like to thank all competitors who played in all the competitions in this extraordinary season. It is very encouraging to see many young players starting to play at a senior level. We look forward to hopefully a full seasons fixture list in 2021. 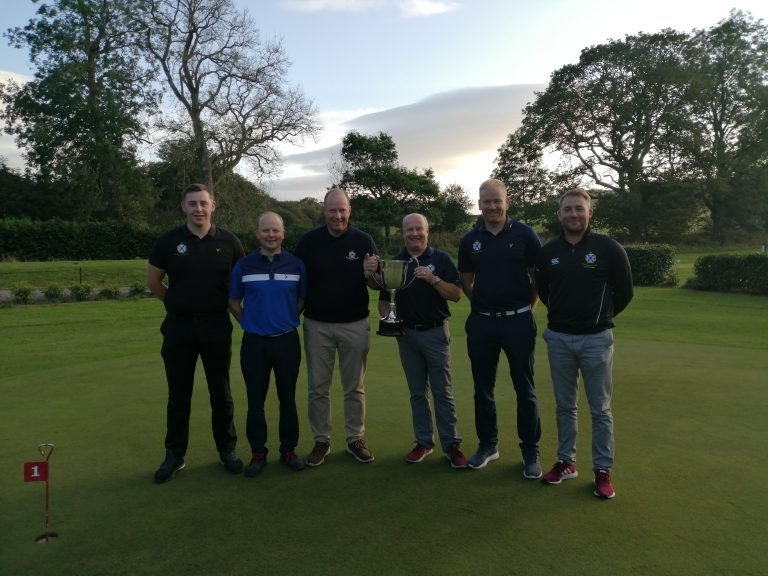 Sunday 15th Sept – The Woll Golf Club was the setting for the Semi-finals and final of the BGA Summer League kindly Sponsored by MKM Building Supplies. The four Semi-Finalists were Eyemouth, Kelso, Peebles and Torwoodlee”B”. The first semi-final was contested between Kelso and Torwoodlee and saw the match go down to the wire with the result tied at 3 games each. The result was decided on the count back process of holes won and saw Torwoodlee”B” progress by the slender margin of 1 hole. The second Semi final of the morning saw Peebles triumph over Eyemouth with a narrow 3 ½ to 2 ½ victory.

Peebles had won the competition the last 2 years and were the Bookies favorites to complete a hatrick of wins in the competition which has run since 1994. The final proved to be a very close fight with the first match between Ewan Gunter and Jamie Morris halved. Torwoodlee went ahead when Richard Forsyth beat Alan Turnbull by 1 hole. Back level again when Kris beat Douglas Turner 3/1. The Gala side edged ahead when Dean Keddie beat Cammy Young by 1 hole. A halved match between Robin Brydon and Jordan Lamb meant that Steven Waldie had to win his match to take the final to extra holes. After James Gill lost a ball on 18, Steven held his nerve to win the last and tie up the match at 3-3 and send the competition to extra holes.

Each team then had to nominate a player to play extra holes. Both Captains chose to put their faith in their number 1 players and this saw a rerun of the first match between Jamie Morris and Ewan Gunter. Peebles won the toss and teed of first at the first extra hole which was the 300 yard 1st hole, a right to left dog leg with a big tree on the corner which deters the golfer from going directly for the green. No risks taken and teeing off into a difficult sunset both players took irons for safety opting to layup to the corner with Jamie finding a better position some 30 yards closer to the green than Ewan. Ewan playing his second shot first and into a slight breeze missed the green to the left and ended up left of the green side bunker leaving himself an awkward 3rd chip shot. Jamie’s played an excellent second shot from the fairway and finished on the green about 20 feet below the hole leaving an uphill putt. Ewan had to get his chip inside this ball which he did but not close enough to be certain of a par. Jamie left his putt some 2 feet short. With the pressure on and the green ringed by team mates Ewan hit his putt and it just crept in the left hand side of the hole much to great relief of the Torwoodlee team. Jamie now had a putt under pressure for a half and to head to the next tee, he struck it firmly but unfortunately for him and Peebles the ball horseshoed out and this saw history made with Torwoodlee”B” winning to make it the first time a “B” team has won the D.MCleod trophy. The match was played in great spirit and was a great advert for the game of golf.

The BGA wish to thank the Woll for the use of the course and facilities and for fitting the finals in at short notice. The players all thought the course was in great condition.

Torwoodlee won on countback by 1 hole